The unexpected happened the other day – I wondered if I would like a step-through bike frame. My stomach dropped and my palms started to sweat. What was I thinking?!

I love my bicycle, Fauntleroy. I wouldn’t change a thing about him. In fact, even though he desperately needs a new paint job, I can’t bring myself to decide on actually doing it, picking a color, where would I take him, and how long would we be parted?! From the Danish front basket to the rear rack that is slowly putting a hole in my pannier, there isn’t anything I want to add or subtract. Except…. I’m making another cute A-line skirt…. and although I always wear something modest under my skirts, hitching the narrower ones up enough to swing over the back of my bike is sometimes an annoyance. Except…. I do love riding Capital Bikeshare bikes and casually swinging my right foot in front of me as I pull up to a station to hop off and dock the bike. Except…. hm….. 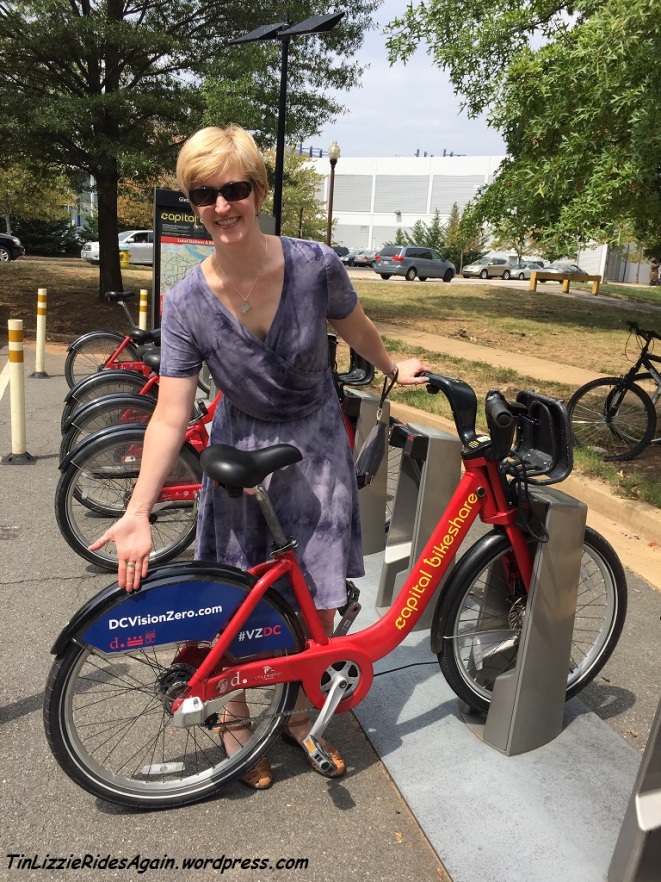 Here’s the problem. I think step-through frames are too girlie. They always are painted in pastel colors and decorated with wicker front baskets, and are often shown with women in skirts or dresses riding them. Well, I wear skirts and dresses often on my bike, but I’ve always appreciated that I’m still badass because I’m riding a men’s mountain bike that was converted by The Mechanic into my commuter bike. Skirt, yes – girlie bike, no. What’s badass about a curvy, swoopy bike frame? Nothing that I can see.

When I mentioned my secret thoughts to a colleague, she had the same reaction – a wrinkling of the nose while saying, “But they are all so girlie!” Her thought was, “Can I ride a step-through bike and still be a feminist?” (She’s a bike mechanic and sews, so she’s more badass than I am.)  A women’s bike frame, to us, just seem too cutesy, pink and ruffles, neither of which we are. We both strive to be strong, independent women, and although we both wear skirt and dresses often, I don’t think either of us would describe ourselves, or each other, as being girlie.

Part of the reason why I like riding bikes is because it makes me feel powerful. Okay, some days I ride home too slowly to be even remotely powerful, but some days I enjoy the feeling of powering myself through the streets, dodging pot holes and bad drivers, and enjoying the weather and street scenes as I breeze past, and I feel powerful. These dainty, curvy bikes in their sweet colors and perky baskets don’t scream “powerful” to me. Actually, they probably don’t scream at all. Too well-bred. Too pre-Title IX.

But my colleague and I talked it through, and agreed that it was important to be open-minded, so I did some research online. After looking at a range of styles, from the super-low Biria step-through “Easy Boarding” bikes (try going over any bump in the road on that!), to the fun, customizable Republic Plato Step-Thru, I stumbled across an old photo of me on my first grown-up bike.

The custom colors I chose on the Republic Plato Step-Thru

In the old, fading, square photo of me, in my purple quilted vest and cool purple leg warmers, I realized that I still love that bike. It’s a shiny burgundy, it has fenders and a chain guard, easy handle bars, and look – a step-through frame! But not a curvy one – ah ha!

I started looking at frames more closely. There’s something about the straight tube that makes them seem a bit less girlie. I really like the Breezer bikes, but there are other brands that are similar. 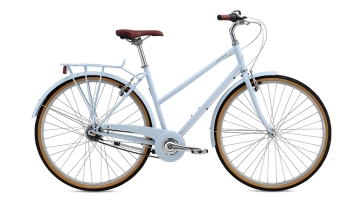 Looking at the old photo, The Mechanic said, “Why don’t we look for those old Raleighs that you love so much?” He did some research to discover that they might not be quite that bad to modernize (I really don’t want a 3 speed bike. That’s what Capital Bikeshare is for), then poked around the internet a bit for reviews and blogs and the like. Made solidly enough to last until now, apparently they are pretty easy to get ahold of on eBay, Craigslist and the like. We’ve seen several for sale in the area already. The late 60s women’s Raleighs look pretty much like my first bike, with the concave chrome detail on the fork crown that I love so much (it’s just an interesting detail many bikes don’t have). If I can find one I like, in decent shape, for fairly cheap, it might turn into a winter project. It might. I still haven’t decided if it they are too girlie for me or not. I need to test ride one to decide. But it would make it easier to wear, and bike in, pencil skirts!

What are your thoughts on bike frames?

14 thoughts on “Step Through Bike Frames: Girlie or Nah?”