A weekend in Baltimore almost killed this public transportation girl.

No, really. The Mechanic and I had planned on spending a cheap weekend in Baltimore – ride his motorcycle, hotel booked with frequent flier miles, walk all over the city to see all the ships in town for Sailabration…  Except at the last minute, the motorcycle had engine problems and we had to find another mode of transportation.

Amtrak was prohibitively expensive (almost $200 round trip per person!), the MARC train doesn’t run on weekends, since it’s a commuter-only service, the Bolt Bus doesn’t go there…. Instead of renting a car, we decided we would take public transportation all the way! After all, there are buses, subways, and light rail all the way between here and there. We guessed it would take about 2 hours from door to harbor. Boy were we wrong!

Here was our plan:

It actually worked that way on the way up, fairly smoothly too. But it took closer to 3 hours, because the 2 buses in my neighborhood don’t run very often on the weekends, so we had to leave earlier than maybe necessary. Then we padded our Metro time, just in case the trains were all screwed (as they so often are on the weekends). In addition, the B30 bus was scheduled to arrive at basically the same time that the light rail was scheduled to leave – and it only ran every 30 minutes. So we had to wait for the next light rail, which did give us time to figure out the ticketing system (sort of). 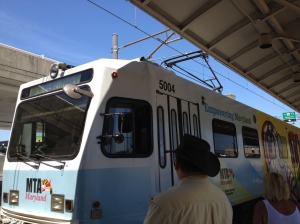 On the way home, however…. the light rail train we were on sat for close to an hour because the train in front of us had technical problems. We got to BWI starving, so decided to eat there, but since that bus only runs every 30 minutes, we basically had to give up an hour or more there (but we ate at the DuClaw pub and it was tasty! I love the Mysterium beer; I’d tried it at the Brew at the Zoo). Then, as we crammed onto the crowded bus, the bus driver yelled at the people still waiting, “There is another bus 5 minutes behind this one!” Really? You tell us that now that we have paid the “special fare” of $6 each?!  So we stood the entire 35-40 minutes to Greenbelt. Luckily both Metro trains were just arriving when we got to each platform, but I did almost have a breakdown when we got to Ballston and there were NO taxis at the taxi stand!

Takeaways from this weekend:

There is so much talk about moving away from car dependency, and the positive impact of public transportation, and yet, as we have proved, it just isn’t there yet. If neither of us had traveled, and been in other countries where we have experienced reliable, efficient, affordable transit, we could beg that whole “ignorance is bliss” thing – but we know better. It’s something I hope the authors of “Road to Nowhere: Federal Transportation Infrastructure Policy” take into account, and something I’d like Congress to remember when they are debating yet another extension on the transportation bill. People demand better transit options – how quickly can we get them? 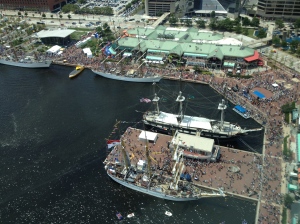 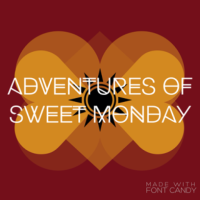