All Biking, No Sewing

Yes, it’s true – this past weekend I did all biking and no sewing! Well, almost all biking – I walked on Sunday. But I biked errands on Friday and The Mechanic and I had a bike date on Saturday, which is more biking that my usual bike to work routine, so yay! And I really didn’t do any sewing, although I did cut out a pattern. And ordered two new patterns. And keep staring at the fabric swatches I got in the mail last week. And helped explain some pattern directions to a friend. But technically, no sewing.

My daily bike commute leaves me somewhat complacent (and with minimal exercise), so it was good for me to shake off some cobwebs and bike around Arlington. And as always, I experienced and observed some things than I feel could easily improve the experiences of others who wish to bike but are concerned, that 60% “interested but concerned” cyclists that the cycling advocates always focus on.  So here are my takeaways from this weekend:

Imagine my shock when, cruising in a bike lane up to an intersection, I spot a sign way across six lanes of traffic that read “bike lane closed.” Considering the sidewalk was also closed, because the whole block is currently a construction site, there was nowhere to go but the traffic lane. Luckily the driver in the car next to me was considerate and let me in front so I could get across the intersection and back onto the trail safely. Also, there was a jogger taking the lane because again, so sidewalk and no accommodations. For an inexperienced cyclist, this could have been a really stressful situation. My suggestion? Add a “bike lane closed” sign in *advance* of the intersection. I could have made route adjustments and gone down a different street. Seeing the sign at the stop sign was a bit too late.

During Friday’s errands, it unexpectedly started raining. I had my Cleverlite Cleverhood in the bottom of my pannier, so I stayed dry (ish), but my bike did not, even when at a bike rack. As I struggled with pannier, bags, gloves, ‘hood, seat cover, lock, keys and lights, I thought about how this situation prevents those 60%-ers from biking more often. It’s a bit of a hassle, running in and out of shops with wet gear, fumbling for the lock while trying to keep everything as dry as possible. 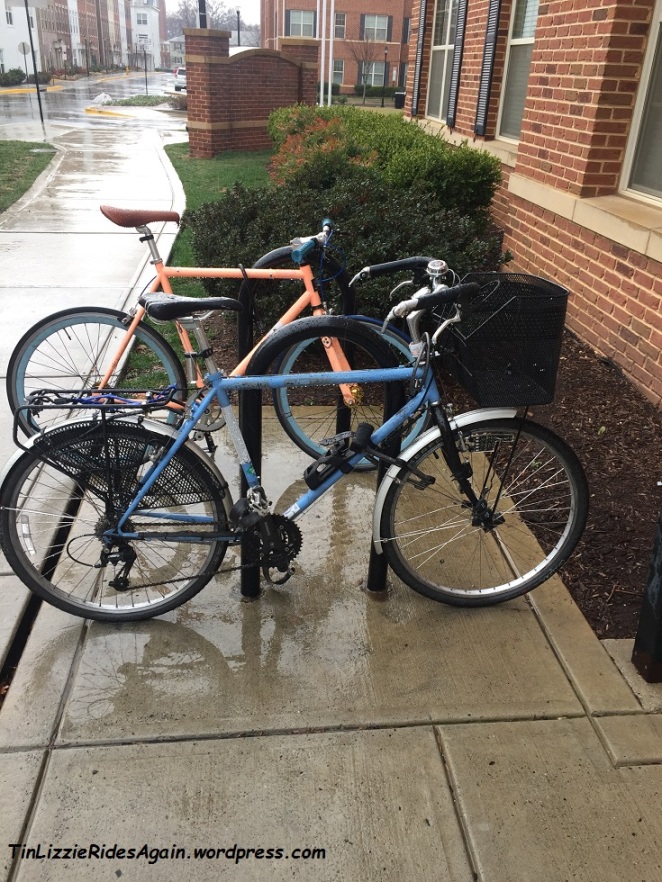 Think then, how nice it would be if more outdoor bike racks were covered! There are a few places in Arlington where the racks are covered, such as by the Clarendon Metro station, but overwhelmingly, most places are lucky to even have a few thought-out staples near popular destinations. Even places like schools would encourage more biking more often if the racks were covered. 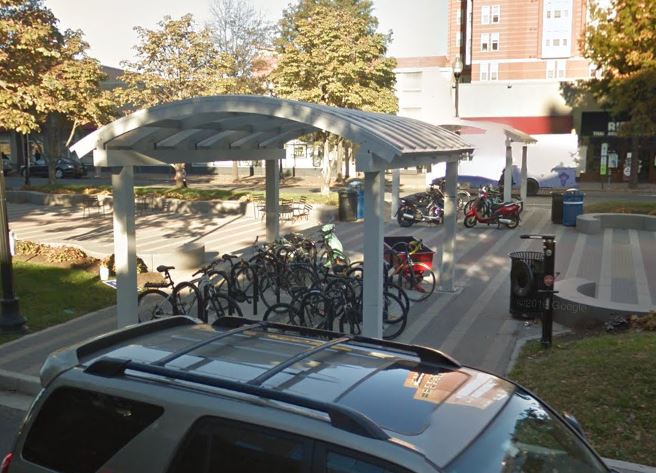 What do we need to do to encourage this trend?

This is somewhat a pedestrian issue rather than a bicycle issue, but really, I get so annoyed when sidewalk curb cuts are blocked, be it by snow, cars, or construction bollards. Clearly it’s too hard for people to consider that someone *might* actually need to roll something down off the sidewalk – wheelchair or baby stroller or maybe even bicycle.

I hate this spot in particular, because I think it is too narrow and too angled to be useful to someone in a wheelchair.

If I, as an experienced cyclist, find these things frustrating, imagine what someone who isn’t as experienced or dedicated might react to these. A sudden vanishing bike lane could scare someone off riding a bike again, while rainy weather and no comfortable place to leave a bike could make someone revert back to their car. Blocked curb cuts are enough to make anyone realize that their local government and community doesn’t really care about how they get around by foot or bike, or how they might struggle with a walker, and cause them to relocate elsewhere. It might seem like a small thing, but really, it’s not.

Is it any wonder that I prefer to stay home and sew?! It offers a good refuge from a city that seems to have it out for me, the cyclist. Currently I can’t wait to order some of this Thread International canvas and jersey, made with recycled plastic bottles collected in Haiti. I want to make 1930s-style wide legged trousers and a simple tee shirt and lounge around in them all summer. Guess I’ll need longer pant straps to keep those pants from getting caught in the gears. That’s at least one frustrating thing I can control!

Not bike friendly but awfully cute!

One thought on “All Biking, No Sewing”